Plexr is a cordless micro-surgical hand operated device that transfers concentrated heat to the treated skin tissues. It uses the difference in voltage between the device and the patient’s skin. The difference in voltage generates a small electrical arc, similar to a minute lighting. The small lighting causes the sublimation of the fluids contained in superficial part of the skin, without unwanted heat transmission to the
adjacent tissues. Additionally it acts on the superficial layer of the skin preserving the lower layers; this will reduce drastically any potential permanent skin damage that could be caused by the misuse of conventional lasers. Place of ‘birth’ of the medical device is Rome Via del Buer. ‘Cap ture’ invention of new energy form was at the
State University “Tor Vergata” Rome, where a Professor with thirty years of experience on the electrosurgical and President of the Italian Socie ty of Aesthetic Medicine and Non Invasive Surgery Giorgio Fippi borrowed the natural phe nomenon of lightning mode and with the inter nationally renowned Engineer Giancarlo Millev olte implemented the idea effectively creating a plasma generator inside the machine (plasma = the fourth state of matter) which safely allows the patient who does not wish to have surgery and the doctor who wants to provide high quali ty service at low cost and equally and in many cases better results, to see 100% of the desired image.

Plasma is one of the four fundamental states of matter, the others being solid, liquid, and gas. Plasma has properties unlike those of the other states. Plasma can be created by heating a gas or subjecting it to a strong electromagnetic field applied with a laser or microwave generator. This decreases or increases the number of electrons, creating positive or negative charged particles called ions, and is accompanied by the dissoci ation of molecular bonds, if present.

The presence of a non-negligible number of charge carriers makes plasma electrically conductive so that it responds strongly to electromag netic fields. Like gas, plasma does not have a definite shape or a definite volume unless enclosed in a container. Unlike gas, under the influence of a magnetic field, it may form structures such as filaments, beams and double layers.

Plasma is the most abundant form of ordinary matter in the Universe, most of which is in the rarefied intergalactic regions, particularly the intracluster medium, and in stars, including the Sun. A common form of plasmas on Earth is seen in neon signs.

Much of the understanding of plasmas has come from the pursuit of controlled nuclear fusion and fusion power, for which plasma physics provides the scientific basis.

Basic vantage point for cases of eyelid surgery, Plexr is a dynamic non-in vasive method that allows the operator to urge the patient at any time during the proceedings to open his eyes, highlighting aspects of skin that still need to be treated and avoiding going after gradual and controlled maneuvers that may have cost image lagofthalmos or excessive opening of the eyes. Regarding any corrective surgery the obvious advantage of Plexr is that is also the perfect choice to avoid further suffering of the patient with correction in his private clinic in infinitesimal time. Histo logical studies from the University of Cheti and the University of Athens (Department of Pathology-Anatomy) also proved that the spots of Plexr not pass the basement membrane of skin.

PURPOSE OF THE STUDY.

In surgical techniques of upper eyelid with a scalpel, a radio scalpel or laser, the patient must enter a sterilized operating room, to be anesthe tized with xylocaine adrenaline injection and this is done by having incisions and sutures. The purpose of the study is to demonstrate that the method of non-invasive eyelid with Plexr

enables the medical treatment of patient without the use of anesthesia (using only anesthetic cream) and sterilization and most importantly, after treatment the patient leaves without incisions and sutures.

The study was conducted over a period of 2 years and used personal medical records. The upper eyelid blepharoplasty was performed to 1000 persons (800 women and 200 men). Target group: 23-82 years old (wheth er they were smokers or not, had large or small excess skin). We used only a medical device (Plexr). All patients accepted antisepsis, and then photos were taken of their face before the treatment and profile in order to see the difference after the treatment (Picture 1). The next step was to apply the anesthetic cream (Picture 2), wait for 30 minute until the cream act so the patient won’t perceive any pain while the treatment is going on. After the action of the cream, we remove it and apply the technique first on the right eyelid (Picture 3) and then on the left. The point where there is excess skin are sublimated. We did not enter in are sublimented we did not enter wrinkles but areas of excess skin. For the machine to operate, it should not touch the skin as ionization gas are needed, so while the micro spots were pulled out, we leave little spaces of healthy tissue. In each session we sublimated 30% of the excess skin (Picture 4,5,6). 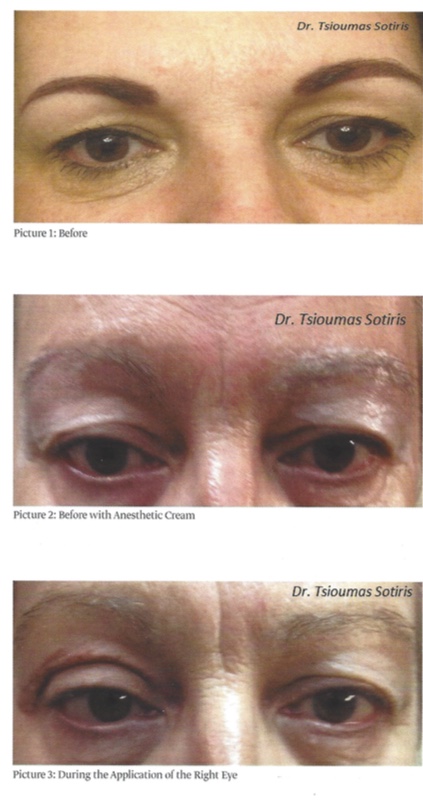 800 out of the 1000 persons have achieved 100% of the desired result in three sessions. 200 out of 1000 persons in one or two sessions. Compared with classical blepharoplasty surgical, outcomes were excellent without sutures and incisions, ectropion and entropion, slanted eyes, lagofthal mos and other complications. The recovery takes place in a shorter period of time (7-15 days) and allows the patients to return to their activi ties even after treatment. It is important to note that in any of the 1000 cases of patients, there was no complication as referred to above. 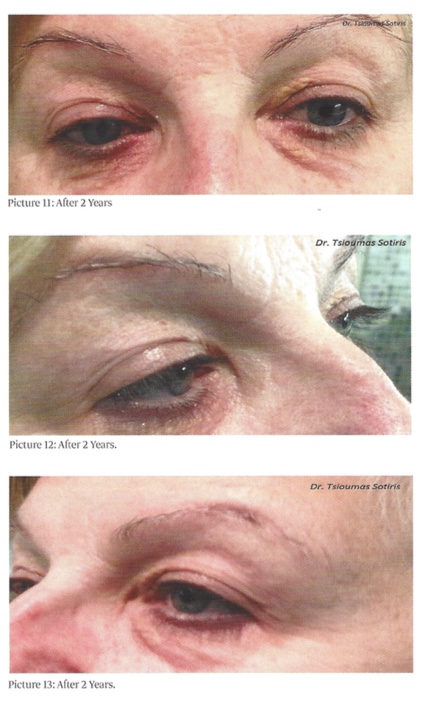 The need of the physician to provide improved innovative non invasive techniques to patients with less pain and cost, but also the need of the patient for cosmetic procedures that avoided them in the past for fear of surgery. The major advantage of Plexr is security that it provides to the patient on undesirable effects. This was proved by the results of the with Plexr. Patients being perfectly pleased with the result, recommend the method to other patients. The Plexr is the bloodless revolution in Blepha roplasty because the doctor can do as many incidents as he wishes per day in his private practice, even take it to a cooperating office or clinic, without side effects and with the best outcome for the patient.

Given the fact that Plexr treatment is something totally new, it is obvious that doctor has to take some more time to explain although the method is well approved by the patients once tried. Last but not least a good percentage of our sample is bound to repeat the procedure in other parts of their face resulting in satisfaction for the patients getting a natural result (their look didn’t change) and more profit for the doctor.

Call us at 1-800-835-9612 or e-mail support@nuvissa.com to make an appointment. You can also Select a time and book through facebook.